The Museum of Mathematics in the Collegius Maius

Another interesting museum located in the Collegius Maius of the Jagiellonian University is an exhibition about mathematics where children can play and learn a lot! There are old calculators from the 20th century…

Children can play with Geography and learn that straight lines in a map are not the shortest ways for the planes:

They can also learn the theorem of Pythagoras scrolling this interesting figure:

There are polyhedra and a lot of geometrical and topological games:

The museum is very small but all the tourist are inside Collegius Maius so you can be very quiet watching all the exhibited objects and toys, like the Rodin’s Thinker:

Finally… here you have my two children playing with Eulerian graphs! They are lovely! Aren’t they?

The mathematical box of Charles II of Spain

Charles II (1661-1700) reigned Spain from 1665 to Novermber 1, 1700. He was the last Habsburg king of Spain because he hadn’t got sons although he got married twice! He was a person with a lot of physical and emotional disabilities and one of the worst rulers of the country. His death in 1700 led to the War of the Spanish Succession between the most important European countries.

When Philip IV of Spain died, his son Charles II was only 4 years old. Philip IV had married Elisabeth of France (1602-1644) and they only had a son: the prince Balthasar Charles. He had to be the new king of Spain but he died of smallpox in 1646. Then, Philip IV decided to get married again and he chose Mariana of Austria (1634-1696). They had some children but only Charles II and his sister Margarita Teresa survived. 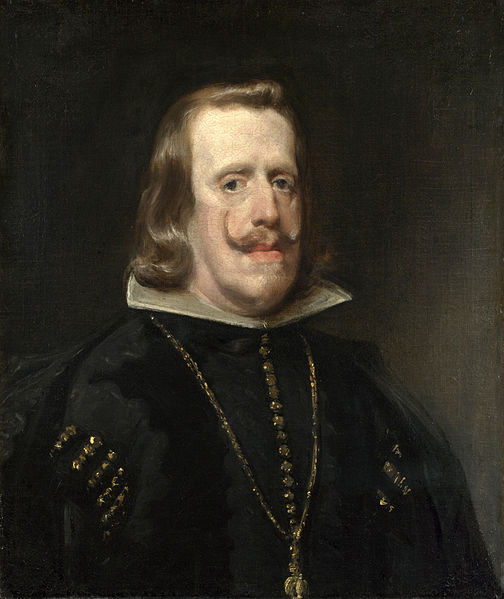 In 1665, the young Charles II became the new king of Spain and his mother Mariana of Austria became regent of her son until 1675 when Charles II was declared of legal age. On this occasion, Juan Francisco de la Cerda, Duke of Medinaceli, gave the king this box. The box contains a series of interchangeable pieces with which it is possible to construc fourteen instruments useful for topographic measurements, designing drawings of fortifications or tuning musical instruments. There also is a book that explains the installation and functioning of all these instruments:

The set was built by the Spanish mathematician José de Zaragoza (1627-1679). The box is very interesting and it can be enjoyed in the Spanish National Library (Biblioteca Nacional) of Madrid and we can see the complete box, the book, a mathematical ruler and an equilateral triangle over all the set:

It’s a shame that a king who wasn’t too smart could have a jowel like this in his hands!

The centre of Spain

We have arrived at Madrid this afternoon! We are going to spend some days in the capital of Spain and our first tour for the city has begun in the Puerta del Sol. In this central square there is this point known as “Km. 0” which is the origin of all the Spanish radial roads and motorways. We could say that it-s the origin of the Spanish coordinates!