The conoids in Sagrada Família Schools

First of all, we have to explain the concept of ruled surfaces: a surface S is ruled if through every point of S there is a straight line (called ruling) that lies on S. This implies that a ruled surface has a parametric definition of the form S(t,u) = P(t) + u Q(t). 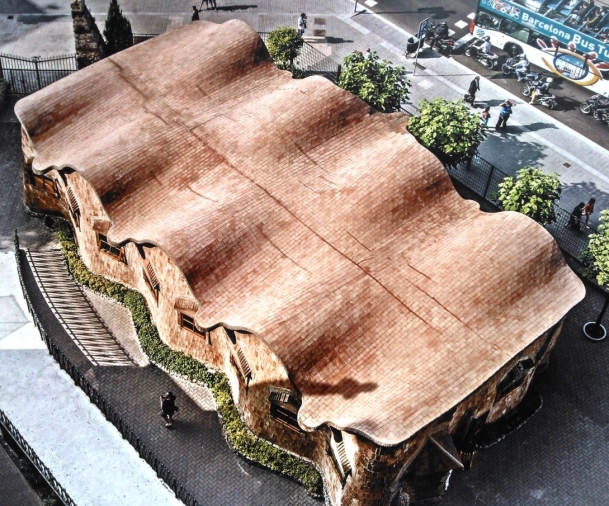 As you can see, the roof of the schools is one ofthese surfaces which we call conoid: we can generate it by displacing a straight line above another straight line (the axis) and above a curve (often a sinusoid). Consequently, for every point on the conoid there is a straight line that passes trough that point and intersects de axis. If all of those straight lines are perpendicular to the axis, then the conoid is called right conoid. The conoid of this post is not in Sagrada Família but on the roof and the façade of the Escoles provisionals de la Sagrada Família. Antoni Gaudí designed that building on the commission of the entity that sponsored the project of the Sagrada Família, the Associació de Devots de Sant Josep (presided over by Josep Maria Bocabella (1815-1892)), and the school was for the children of the parish and also the children of the building workers of the temple. The building was divided in three classrooms, a hall and a chapel, and was constructed with brick. Its principal promoter was Gil Parés i Vilasau (1880-1936), the first parish priest of the Sagrada Família. He was also the school’s principal until 1930 and he used the Montessori method from 1915.

The building, inaugurated on November 15, 1909, has an amazing story of destructions and reconstructions. In fact, this peculiar school was intended to be demolished because Gaudí located it occupying land reserved for the construction of the Sagrada Família’s Passion façade. However, it was dismantled and rebuilt earlier than expected as a result of the several damages during the Spanish Civil War (1936-1939). Domènec Sugrañes i Gras (1878-1938) designed the restoration that finished in 1940, but the project had few funds and for this reason, in 1943 Fransesc Quintana (1892-1966) directed another refurbishment. Many years later, in 2002, the Passion façade was going to be built, so the building of the Escoles provisionals de la Sagrada Família was dismantled again and reconstructed in the corner between Sardenya and Mallorca streets, where the picture has been taken. In this regard, we can add that the building has become a small museum. It is important to note that the fact of being surfaces generated by straight lines makes the construction of the roof and the façade easier. Besides that, the profile of the roof is highly effective to drain off waterin a rainy day.

The contrast between the simplicity of the building (it was a very cheap and quickly erected structure) and its importance in twentieth century architecture is really remarkable.

This post has been written by Àlvar Pineda in the subject Història de les Matemàtiques (History of Mathematics, 2014-15)