Chen Jingrun (22 May 1933 – 19 March 1996) made very important contributions in Goldbach’s conjecture like the demonstration of Chen’s theorem (1966): every suffiently large even number can be written as the sum of a prime and a product of two different primes.

In 1999 China issued the stamp “The Best result of Goldbach conjecture”: 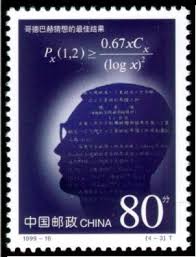 The doodle was published five years ago.

Another of the important equations which stands out in the main entrance of Cosmocaixa in Barcelona is Fermat’s last theorem:

Fermat was reading Diophantus’ Arithmetic about the pythagorean triples x2 + y2 = z2 in 1637 when he noticed immediately that n = 2 was the only case which satisfies the equation xn + yn = zn. Then, he wrote in the margin of his edition of Diophantus’ work:

it is impossible to separate a cube into two cubes, or a fourth power into two fourth powers, or in general, any power higher than the second, into two like powers. I have discovered a truly marvelous proof of this, which this margin is too narrow to contain

Finally, if we had (x2)2 + (y2)2 = z2 , we have obtain p and q co-prime with  z = p2 + q2. Then it is possible to obtain another pair u and v co-prime with p = u2 + v2 and p < z, u < p and v < q. So we can iterate this algorithmic procedure so we’ll obtain a set of pairs of natural numbers each of them lower than the previous and this fact is false, since we’d have an infinite decreasing succession of natural numbers without end!

Nobody accepts that Fermat could have known any other case apart of n = 4! In 1753, Leonhard Euler wrote a letter to Christian Goldbach telling him that he had proved the case n = 3 but the demonstration that he published in his Algebra (1770) was wrong. He tried to find integers p, q, z such that (p2 + 3q2) = z3 and he found that:

He worked with numbers of the form a + b√-3 to find two new numbers a and b less than p and q such that p2 + 3q2 = cube and then he applied the method of infinite descent. Unluckily, he made some mistakes working with the new complex numbers  a + b√-3.

This story is so exciting but, almost quoting Fermat, this post is too short to contain everything. If you are interested in, you must read Simon Singh’s Fermat last theorem which is as interesting as the theorem itself.

The Russian Academy of Sciences

In the period 1697-1698, Emperor Peter I of Russia traveled to England and the Netherlands and he could observe the development of culture and science in those countries. Peter I saw the necessity of promoting a cultural program in Russia to develop Russian science and began corresponding with Gottfried Wilhelm von Leibniz (1646-1716) about the state of Russian science. The result of this relationship was the establishment of a scientific academy in St. Petersburg which Leibniz would give precise instructions to found it as buying scientific books and founding museums and libraries. Leibniz also suggested that the new academy had to be conceived in the new Western European style so Russian science could have the same level as English, German or French cultures. Peter I decided to travel to Paris to visit the Paris Academy and he had the opportunity of attending one of its meetings in 1717 and this institution was the final model to establish the Russian Academy. So the new Academy would have a small group of scientists with direct royal support in spite of the decentralized model of the Royal Society of London and Peter I ordered to choose the best European scientits and to persuade them to joim his ambicious project in 1725. Peter I died on 28 January 1725 and his wife Enpress Catherine I took the responsability of the final founding of the Academy: the first meeting were held in November of that year with great scientisit as Nicolaus and Daniel Bernoulli, Johann Duvernoy, Christian Goldbach and Gerar Müller; Leonhard Eurler joined the Academy two years later in the physiology chair.

Catherine I died in 1727 only a few months after Euler’s arrival and she was succeeded by Peter II, grandson of Peter I, who was 12 y.o. His reign (1727-1730) was influenced by the royal conservative courtiers and after moving the Russian capital from St. Petersburg to Moscow, the Academy began a period of decline. His successor was Anna Ivanova (or Anna of Russia) whose reign ended at her death in 1740. She came from the German duchy of Courland in the Western Latvia) and she established herself as an autocratic and very unpopular ruler. She brought some advisers from Courland and her expensive and strange policies caused people to  think that the problem were her German courtiers so xenophobia started to increase among the citizens. The Empress was hated by her people but so were the foreign scientist who worked in the Academy. Furthermore, the leadership of the Academy was formed by German members meanwhile Russian mathematicians, physicists, astronomers,… occupied lower positions. Although the situation of the Academy was so bad, it became worse when the Empress died in 28 October 1740 and her grand-nephew Ivan VI Antonovich (born in 23 August 1740) was crowned as the new Emperor. Ivan’s mother Anna Leopoldovna was appointed to regent and in chaotic situation of the period 1740-1741, Euler and his family decided to move to Berlin to take up a position in the new German Academy: Russia had lost its great scientist!

In 1741 Elizaveta Petrovna was declared new Empress of Russia. She exiled the most unpopular German advisers of her court and started a period of anti-German policy. She was very extravagant but she loved the theatre, the music and the architecture so her reign was the perfect place to raise the cultural level. She transformed her court in a leading musical and theatre site and a lot of French, German and Italian actors, actresses and musicians traveled to Russia to play for the Empress. There also were a new revival for the Russian science and the  St. Petersburg Academy which was associated to an University. Despite the new situation of the institution, the scholars of the Academy didn’t have good conditions to work and they often were supervised by inquisitorial and restrictive rules. Elisaveta died in 1761 and she was succeeded by her nephew, Peter III who reigned in the period from  5 January to 9 July 1762. His wife Catherine led a coup against him and ordered his murder so she became Empress Catherine II in June 1762.

Her ascension to the throne made a more  favorable environment for arts and science. She was a very cultivated and clever woman because she had been educated reading the French encyclopedists d’Alembert and Diderot and Voltaire too. Catherine issued the Statute of national Education in 1786 and during her reign, Leonhard Euler came back to the Academy from his position in Berlin. According to E. T. Bell (Men of Mathematics. New York: Simon and Schuster, 1961):

Catherine received the mathematician as if he were royalty, setting aside a fully furnished house for Euler and his eighteen dependents, and donating one of her own cooks to run the kitchen.

Euler lived in St. Petersburg until his death in September 1783. During his second Russian period, Euler wrote nearly half of his 856 listed works and the Academy published most of them posthumously.

Catherine II was succeeded by her son Paul I and in his only five years of reign he changed the reformist policy of his mother. For example, he decreed that no Russian could attend Western-style schools, attempted to prevent foreign books from reaching Russia, and cut off all funding for academic institutions. The Academy was saved by Paul I’s son alexander I who in 1803 presided its major reorganization. It was renamed Académie Impériale des Sciences and its annual publication also changed its name for its French version Mémoires de l’Académie Impériale des Sciences de St. Pétersbourg. Those years were a new height for Russian science until the Russian Revolution of 1917. In 1925, the Soviet government moved the Academy to Moscow and now the building placed in St. Petersburg is the headquarters of the Russian Academy of Sciences.