There is no Zero! 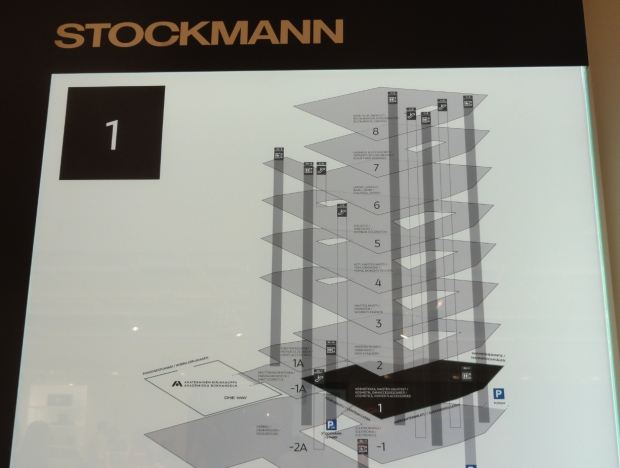 Poster in the Stockmann mall
Photography by Carlos Dorce

One of the things which surprised me a lot in my visit to The Scandinavian countries is that they call “1” to the ground floor of a building. That fact is not a problem for the mind but when I visited the popular Stockmann mall in the centre of Helsinki and I wanted to go downstairs… The floor below the floor plant is number -1! Where is 0? There is no zero! 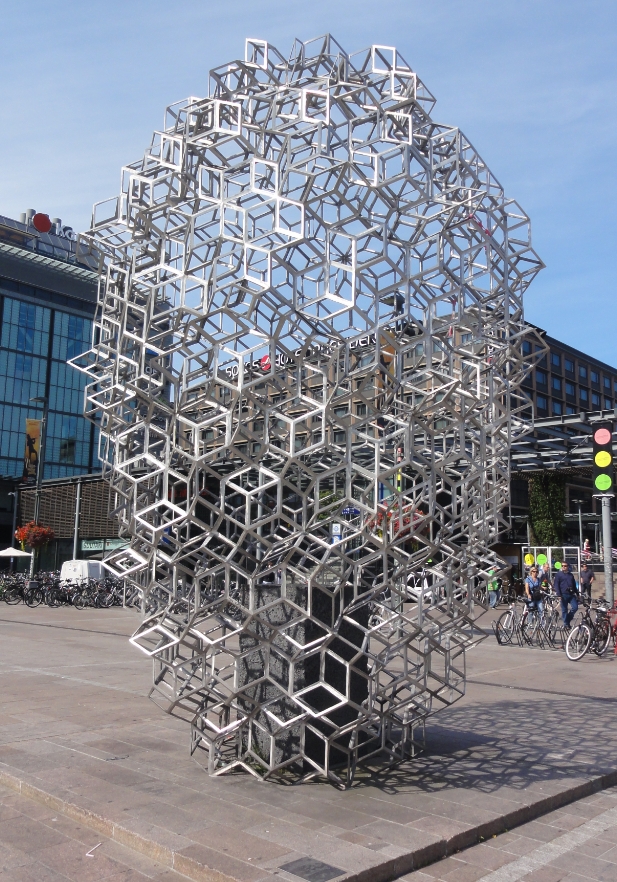 There is no doubt that this Eva Löfdahl’s monument is a set of a lot of crowed platonic cubes. I don’t know what this monument is dedicated to, but do you agree that it’s a mathematical attraction? When you are next to the monument you can see that there aren’t any cubes and everything is an optical illusion but… isn’t this perfect combination of diamonds a extraordinary geometric attraction? 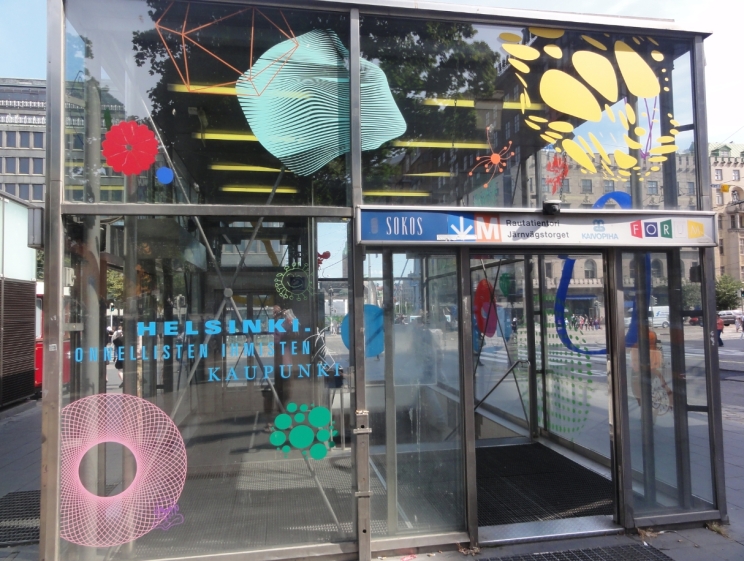 Helsinki is the World Design Capital. When you walk through the streets of its “Design District”, you can see all these mathematical figures as part of a promotional campaign. Curiously, the icosahedra, the ellipses, spheres,… are also in the metro stations!

Mathematics are in the service of advertising and good taste! 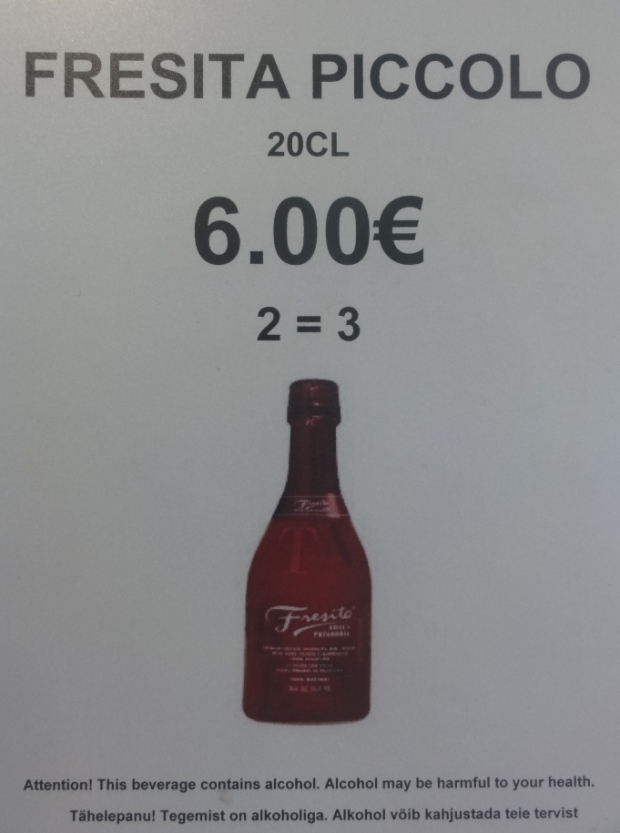 2 is equal to 3? I found this is the advertisement travelling in the ferry from Helsinki to Tallinn. It probably means that if you buy 2 bottles of Fresita Piccolo, you’ll receive three bottles so you’ll get one free bottle. Nevertheless, a good mathematician knows that 2 won’t never be equal to 3, doesn’t he? If we have 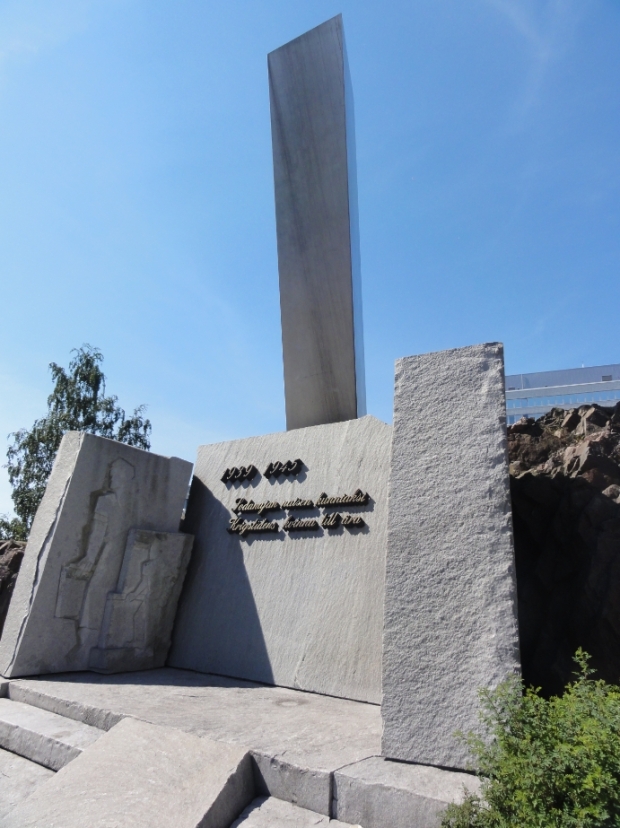 I decided to visit the district of Kallio in Helsinki. Helsinki centre is not too big and I had a lot of time for walking around other interesting neighborhoods of the city. and   Passing through the picturesque market Hakaniementori and going to the the majestic church in the top of the hill , I found this monument nailed to the rock. Apart from being one of those spaces which makes you remember that Helsinki was built on a rocky mountain, I was surprised by the oblique prism located on the top of the monument. I turned around and saw that the prism was a right prism nailed obliquely.

This is one of those examples of a geometric shape in the service of art. 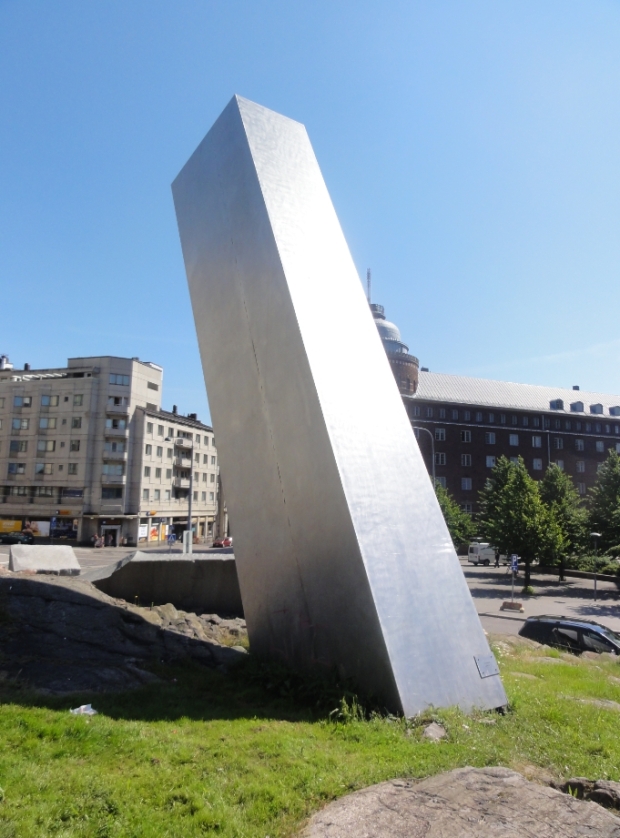 Finnish “Peace in the World” 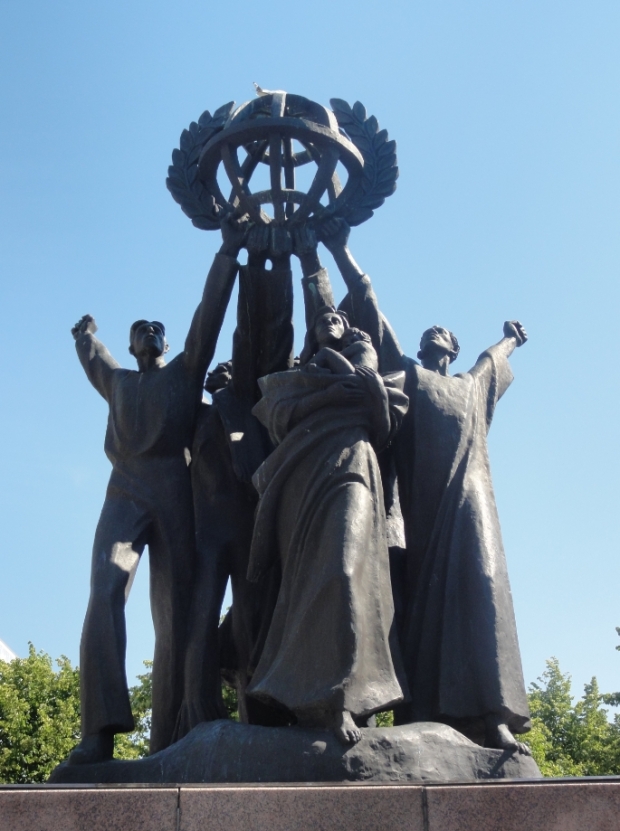 This monument is in the Kallio district of Helsinki (next to the sea). It was a present from Moscow to the city of Helsinki made by O. S. Kirjuhin. It represents the Peace in the World and people is holding a terrestrial globe surrounded by a garland of laurel. There are represented the equator and eight meridians on the globe. 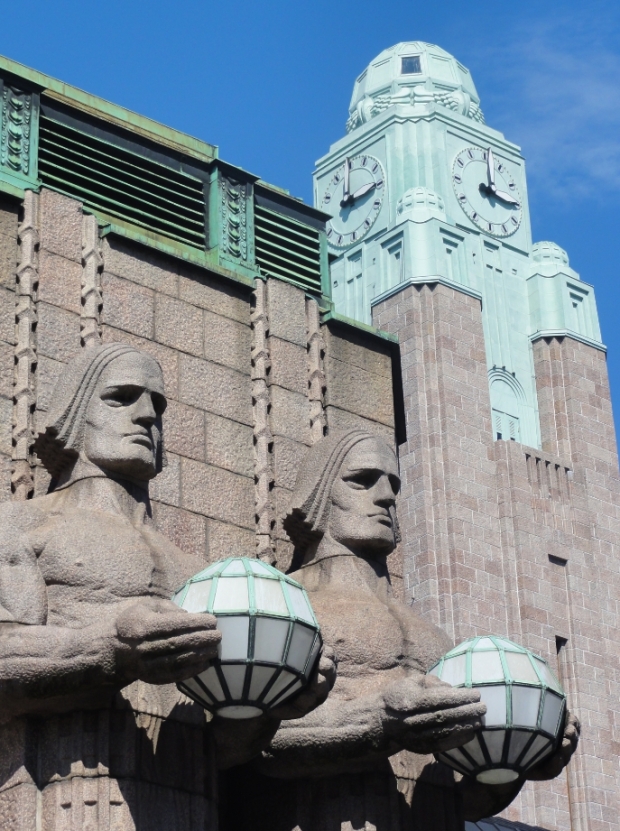 Another mathematical curiosity that I founf in my first day in Helsinki was located in the Central Railway Station. According to Wikipedia, this building is a widely recognised landmark in central Helsinki, and the focal point of public transport in the Greater Helsinki area. The station is used by approximately 200,000 passengers per day, making it Finland’s most-visited building. It serves as the point of origin for all trains in the local VR commuter rail network, as well as for a large proportion of long-distance trains in Finland. The station also hosts the Rautatientori metro station, which is the busiest station of the Helsinki Metro. On 7 June 2010, the Helsinki Central railway station was officially renamed Helsingin päärautatieasema-Helsingfors centralstation (Helsinki main railway station, or Helsinki central railway station) in Finnish and Swedish, replacing the previous official name Helsingin rautatieasema-Helsingfors järnvägsstation (Helsinki railway station).

The first railway station in Helsinki was built in 1860, as Finland’s first railway between Helsinki and Hämeenlinna was opened. The station’s plans were drawn by the Swedish architect Carl Albert Edelfelt. However, as the popularity of railways grew, the station turned out to be too small, and a contest was organised in 1904 with the intention of producing plans for a new station. The contest received 21 entries, and was won by Eliel Saarinen, with a pure national romanticist design, which sparked off a vigorous debate about the architecture of major public buildings, with demands for a modern, rational style. Saarinen himself abandoned romanticism altogether and re-designed the station completely. The new design was finished in 1909 and the station was opened in 1919.

The mathematical objects of the “modern” building  are located in the sculptures in the main doors and in the top of the clock tower. Each stone man is holding a light in the shape of a polyhedration of the sphere and the same shape is on the clock tower. I’m sure that almost all the passengers who walk through the corridors of the station don’t admire these polyhedra. 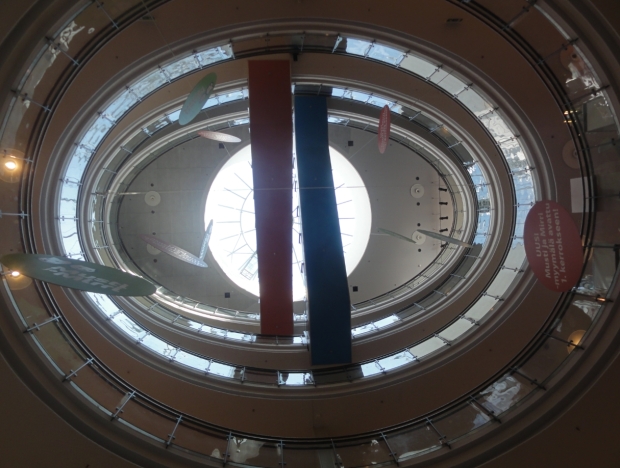 Can you imagine going shopping and finding a beautiful ellipse? I found it in my first day in Helsinki! I wasn’t looking for it but I was walking through the streets of Helsinki looking for a restaurant where having lunch was cheaper than 10 € (it’s almost impossible!) and… look at Kampii store! It’s a commercial store with a bus station inside so it had to be cheap! I walked into the mall and after a few steps I looked up. Waw… Here is my ellipse! Usually in such malls we find more circles or squares more than other conics. However, it was my first mathematical surprise in Helsinki. 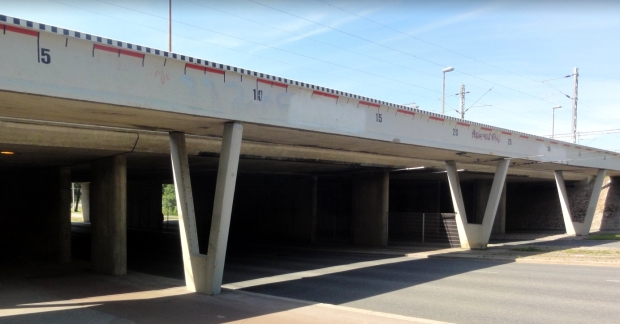 One of the things you must do if you visit Helsinki is going to Linnanmäki which is an amusement park in the north of the city. It’s not cheap but you will fun a lot! Furthermore, if you go down from the park to the center of the city through the Western shore of Töölönlahti, you will be lucky to find this curious bridge where trains pass over the cars and the people’s heads. This bridge is exactly 50 meters long and now you can wonder … why can we know this measure?  Because there is a great ruler painted in it! This could be a mere bridge but the Finns have been able to bring joy to all those people who love Maths!