Today is Edmond Halley’s birthday and this doodle was published in yhe United Kingdom in 2011 to celebrate his 355th birthday. 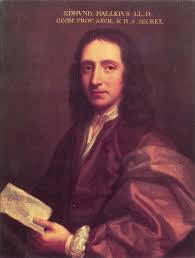 Posted in: _The Net | Tagged: Halley

Some caricatures of famous mathematicians

In my last post about the Hewelanium Centre of Gdansk, I must show you the caricatures of the famous mathematicians and astronomers which you find on the walls (and you also can buy as a puzzle in the shop of the museum). You have pictures of Archimedes, Pascal, Copernicus:

These aren’t good pictures but the posters are in 3D and my camera is not the best camera in the World!

The National Portrait Gallery in London

This was one of the great moment in my last holidays in England! Newton and me together in the same picture! (I must thank the guard because he allowed me to take this picture) Today is 25 December and this is the reason because I am publishing today this picture: Newton was born on December 25, 1642 (Julian Calendar) so… Happy Birthday Great Mind!

An immensely influential mathematical scientist, in one year (1665-6), when driven from Cambridge by plague, Newton formulated a series of important theories concerning light, colour, calculus and the ‘universal law of gravitation’. According to tradition, he developed the latter theory after seeing an apple fall from a tree. He published Principia (1687) and the Optiks (1704), and was knighted in 1705. Newton was President of the Royal Society from 1703 until his death.

Newton is not alone and he is accompanied by other great English scientist like Edmund Halley. The portrait of Halley is attributed to Isaac Whood (1688-1752) from 1720. Halley has a chart showing his predicted path accross Southern England of the total solar eclipse of 22 April 1715.

Astronomer. At the age of twenty-two in 1678 he published his catalogue of the stars of the southern hemisphere, and in 1705 his celebrated work on comets. Halley published Newton’s Principia at his own expense, 1687; he was appointed Astronomer Royal in 1721. He successfully predicted the reappearance of the great comet in 1758 (‘Halley’s Comet’).

Sir Christopher Wren (showing a plan of St. Paul’s Cathedral) is also in the Gallery:

Wren was an architect and scientist. After the Great Fire of 1666, he rebuilt St. Paul’s Cathedral and many of the London City Churches; his work includes the Sheldonian Theatre in Oxford (1664-9), Trinity College Library in Cambridge (1674-84), Chelsea Hospital and Greenwich Hospital (from 1696). He was professor of Astronomy at Oxford and later President of the Royal Society.

Herschel and Boyle are also exhibited in the Gallery but it was almost impossible to take a picture of them so it’s better if you go to the National Portrait Gallery web and you’ll see better pictures of them.

Before ending this post, we must look at this anamorphic picture of King Edward VI:

This unusual portrait of Edward was painted in 1546 the year before he became king. He is shown in distorted perspective (anamorphosis), a technique to display the virtuosity of the painter and amaze the spectator. Anamorphic portraits were relatively popular in mainland Europe at this time, but this painting was considered particularly remarkable […].

The anamorphosis is a very interesting mathematical technique which must be explained in detail but I am not going to do it now.

The Royal Observatory in Greenwich (and III)

The third step in the visit to the Royal Observatory of Greenwich is Flamsteed House.

The Royal Observatory of Greenwich was founded in 1675 when Charles II ordered that a small observatory be built in Greenwich Park and appointed John Flamsteed as his ‘astronomical observator’. Flamsteed’s task was to make observations that would improve astronomical navigation, in particular providing a means of finding longitude at sea.

The ceiling of the first room is painted with a map of the night sky and there are portraits of the ten Astronomers Royal who lived here between 1676 and 1948:

Christopher Wren was responsible for building the Observatory. He later said that it was designed ‘for the Observator’s habitation & a little for Pompe’. The following four rooms were Flamsteed’s living quarters. They were incorporated into the enlarged home of the Astronomer’s Royal over the next two and a half centuries. Beyond these, upstairs, is the magnificient Great Star Room, or Octagon Room.

The Octagon Room is one of the few surviving interiors designed by Wren and it was used mainly for observing eclipses, comets and other unusual celestial events.

The 32-inch Astronomical Quadrant is located in this room. It is signed by John Bird but the telescope which was once attached is missing.

The engraving of the Octagon Room by Francis Place shows a similar, earlier quadrant standing on a wheel-tripod platform, which allowed the astronomer to roll it from window to window.

On the wall behind the quadrant we can see three replicas of the clocks which were made in 1676 by Thomas Tompion and sold by Flamsteed’s widow some years later. There is also a replica telescope tube of the kind used here until 1765. Will my daughter be able to discover a new planet?

If we go downstairs now we’ll discover an exhibition about the determination of the longitude at sea:

At sea, navigation is a matter of life and death. Out of sight of land, how can you tell where you are?

By 1700, skilled seamen could find their position north or south (their latitude), but still lacked accurated instruments or methods to calculate their east-west position, known as longitude.

With growing international trade, the lives and valuable cargoes lost in shipwrecks made solving this ‘Longitude Problem’ urgent for all sea-going nations.

The exhibition starts with these two 17th-century globes from North Africa (left) and Persia (right) and then you meet the star of the ‘Longitude Problem’:

One solution to the Longitude Problem was an accurate and portable sea-going clock. By 1726, news of the Longitude Prize had reached John Harrison, a carpenter and self-taught clockmaker from Lincolnshire. Harrison was already making highly accurate land-based clocks and had solved major problems to do with temperature change and friction.

Harrison spent the next 45 years of his life developing portable sea-going timekeepers that would accurately, in spite of a ship’s motion and temperature changes. Each timekeeper represented years of obsessive labour.

By 1760, Harrison had solved the Longitude Problem with his fourth marine timekeeper, now known as H4. It is one of the most important machines ever made.

This timekeeper took five years to build. In 1736, it was tested on a sea voyage to Lisbon and back. Harrison was very seasick, but the timekeeper worked. It was the most accurate sea-going clock then known, though not quite accurate enough to win the 20.000 pounds prize.

This prize was offered in 1734 by the British government for a ‘practical and useful’ method enabling ships to determine their longitude at sea.

In the exhibition there are also some timekeepers more and the portraits of some of the most important scientific men which lived in the same time as Harrison: Halley succeeded Flamsteed as Astronomer Royale and his major programme was to replace all the astronomical instruments which were sold by Flamsteed’s widow, and to chart the Moon’s 19-year cycle.

Newton advised the Parliamentary committee that established the Longitude Prize and became a member of the Board of Longitude:

Finally, apart of the camera obscura, we can find outside the Family Tombstone of Halley which was moved to the Observatory from the churchyard of St. Margaret’s in Lee when Halley’s tomb was restored in 1854. The tomb itself is still located at St. Margaret’s with a replica tombstone in place:

As you have seen, you must visit the Royal Observatory in Greenwich if you visit London: it’s only a few metro stops from the center of the city!

Isaac Barrow also has his monument in Westminster. It’s in the Poet’s corner but Newton’s teacher and mentor had to have his space in this holy building:

Apart of Isaac Newton, other scientific whose names are related to Westminster are Edmond Halley, who has a commemorative plaque in the cloister of the abbey:

This is the house where Edmond Halley lived and had his observatory according to the plaque fixed on one of its walls:

Halley is famous because of his discovery of the Halley comet but he also was one of the most important astronomers of his time.

Can you imagine Halley looking at the sky from the terrace of his house?

The Museum of the History of Science (II)

The great scientific names in the History of Science also have their space in the museum as we can see in this medal with the name of Edmund Halley.

Christopher Wren’s name is in one of the windows of the stairs through which you go to the first floor:

The inscription is under a big “coat of arms” dedicated to the Science:

Finally, I am going to mention the famous blackboard written by Albert Einstein:

Location: The Museum of the History of Science (map)