Today is our first day in Warsaw! My wife, my son, my daughter and me are going to visit Poland for twelve days and I am sure that the mathematical tourist is going to see a lot of things!

This morning we have been in the city centre and we have walked through Krakowskie Przedmiescie and Nicolas Copernicus was there! His natural position is the middle of Copernicus square which is called with his name and he is rounded by his heliocentric system:

We can read in wikipedia:

Nicolaus Copernicus (Polish: Mikołaj Kopernik (help·info); German: Nikolaus Kopernikus; 19 February 1473 – 24 May 1543) was a Renaissance mathematician and astronomer who formulated a heliocentric model of the universe which placed the Sun, rather than the Earth, at the center. The publication of Copernicus’ book, De revolutionibus orbium coelestium (On the Revolutions of the Celestial Spheres), just before his death in 1543, is considered a major event in the history of science. It began the Copernican Revolution and contributed importantly to the scientific revolution.

Copernicus was born and died in Royal Prussia, a region of the Kingdom of Poland since 1466. Copernicus had a doctorate in canon law and, though without degrees, was a physician, polyglot, classics scholar, translator, governor, diplomat, and economist who in 1517 set down a quantity theory of money, a principal concept in economics to the present day, and formulated a version of Gresham’s law in 1519, before Gresham.

The bronze statue was designed by the Danish sculptor Bertel Thorvaldsen (c.1770-1844) in 1822 and was completed eight years later. The phiolosopher Stanislaw Staszic (1755-1826) made important donations for erecting it in Torun because he knew that Napoleon was very surprised for not finding a monument dedicated to the Polish astronomer in his birthplace. 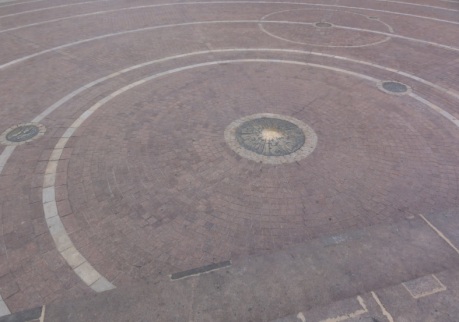 In 2007, Copernicus’ solar system was represented rounding him representing an image from his revolutionary De Revolutionibus Orbium Coelestium (1543).

The statue is in front of Staszic Palace (1620), the seat of the Polish Academy of Sciences. In 1967, a bronze replica was erected in Chaboillez Square in Montreal during the World’s Fair:

In 1973, on the 500th anniversary of Copernicus’ birth, another bronze replica was installed in front of Adler Planetarium in Chicago:

René Magritte (1898-1967) painted in his Euclidean Walks a surrealist comparison between the actual geometry of the roof of a tower and the projective illusion of a street. Perhaps, this was the reason why he thought of the great Euclid for the title of this charming and surprising picture.

Oh Euclid! If you come back to our World you’ll see what provocations are inspired by your name!

This curious portrait of the great mathematician can be seen in the Menil Collection The first proposition in book I of Euclid’s Elements is about the construction of the equilater triangle and this could be the reason why Euclid’s face is something similar to a tetrahedron. German Max Ernst was very impressed by the surfices which he saw i his visit to the Henri Poincaré Institute of Paris and this mathematical discovery opened his mind to include geometrical things in his works. For now, if you ever visit Houston, don not miss the eccentricity of one of the most important Dadaist and Surrealist Masters.
Location: The Menil Collection in Houston (map)
Posted in: U.S.A. | Tagged: Euclid

Sundial in the Corpus Christi College

Corpus Christi College is one of the constituent colleges of the university of Oxford. It was founded in 1517 and one of its symbols is the Pelican sundial erected in 1581 by Charles Turnbull in the main quadrangle. I went to visit the College but unluckily it was closed. Therefore, I asked permission from a guard to let me go in to see the sundial closer and he agreed. The sundial is wonderful and has a pelican on its top:

All the column is another sundial and it’s explaines the way how the sundial works:

There is a copy of this sundial in the university of Princeton known as Mather Sundial (you can see more information clicking on the picture below):

The Mather Sundial, which sits in the center of McCosh Courtyard, is a replica of the Turnbull Sundial (1551) at Corpus Christi College, Oxford. It was given in 1907 by Sir William Mather, governor of Victoria University in Manchester, England, “to symbolize the connection not only between Oxford and Princeton, but between Great Britain and America.” There are 24 different dials on it, and the frustum supports a globe (representing the earth) with a pelican on top (the symbol of Corpus Christi College).

At one time, the Mather Sundial was the province of seniors, who by custom enjoyed the exclusive privilege of sitting on its steps between classes.

Josef Albers was a German-born American abstract artist whose study of color made possible to create some beautiful geometrical compositions as the Homage to the Square: Apparition (1959) kept in the Guggenheim Museum of New York. He enrolled at the Bauhaus school of art in Weimar and where was appointed as a teacher in 1925. He remained in the school until the school closed in 1933 and then he emigrated to the USA. In 1950 he joined the University of Yale and began his famous Homage to the Square series. Here you have two paintings more:

Homage to the Square: With Rays (1959) Metropolitan Museum of Art of New York

Homage to the Square: Soft Spoken (1969)
Metropolitan Museum of Art of New York

De la Hire also painted the allegories of the Geometry and the Astronomy. The Geometry is  a young woman with a paper in her left hand in which we can see some geometrical constructions as the famous Euclid’s demonstration of the theorem of Pythagoras:

Detail of the painting

In her left hand, she also holds a right angle edge and a compass. We can also see that there is a sphinx and an Egyptian background in the right which represents the Egyptian origin of the Geometry. Proclus stated that:

Since, then, we have to consider the beginnings of the arts and sciences with reference to the particular cycle [of the series postulated by Aristotle] through which the universe is at present passing, we say that, according to most accounts, geometry was first discovered in Egypt, having had its origin in the measurement of areas. For this was a necessity for the Egyptians owing to the rising of the Nile which effaced the proper boundaries of everybody’s lands.

Herodotus says that Ramses II distributed the land among the Egyptians in equal rectangular plots on which he levied an annual tax. When therefore the river swept away a portion of a plot and the owner applied for a corresponding reduction in the tax, surveyors had to sent down to certify what the reduction of the area had been.

The Geometry is next to a globe which nods to the science devoted o measuring the Earth (Geo + metry = Earth + measurement). There is also a snake representing the ancient goddess of the Earth. Kenneth Snelson (born June 29, 1927) is a contemporary sculptor who arranges rigid and flexible components to compose his sculptures combining tension and structural integrity. This Neddle Tower II (1969) is 30 meters high and it’s interesting here because of this picture:

Is a mathematical picture or not? The sculpture is in the garden of the Kröller-Müller Museum in Otterlo.

There is another Neddle Tower (1968) beside Hirshhorn Museum and Sculpture Garden on the National Mall in Washington, D.C.:

According to the Mathematical Tourist (by Ivars Peterson):

Snelson discovered the underlying principle for such structures in 1948, advocating the term “floating compression” to describe the balance between tension and compression and, in his sculptures, between flexible cables and rigid tubes. R. Buckminster Fuller (1895-1983) coined the word “tensegrity” (combining “tension” and “integrity”) for the same idea, and his term stuck. Snelson refers to weaving as the “mother of tensegrity.”

Snelson defines “tensegrity” as follows: “Tensegrity describes a closed structural system composed of a set of three or more elongate compression struts within a network of tension tendons, the combined parts mutually supportive in such a way that the struts do not touch one another, but press outwardly against nodal points in the tension network to form a firm, triangulated, prestressed, tension and compression unit.”
Snelson’s Needle Tower delivers a wonderful geometrical surprise when you venture underneath and look up to see a striking pattern of six-pointed stars.

This pattern arises naturally out of the requirement that each layer of a tensegrity structure consist of three compression elements (tubes). The sets of three alternate, giving the impression of a six-pointed star as you look up the tower. Snelson’s sculptures often show this kind of symmetry.

The elegance of Snelson’s tower suggests its use as an aesthetic alternative to conventional communications towers. But tensegrity structures are fairly elastic and flexible. They sway in the wind, which may not be ideal for the antennas and dishes that would top such structures.

Philippe de la Hire’s father was the painter Laurent de la Hire (1606-1656) who got a lot of commissions from distinguished politicians, the Church and rich Parisian who wanted to have a portrait in their houses. But Laurent de la Hire had also time to paint the Allegories of the Liberal Arts and the Arithmetic can be enjoyed in the Walters Arts Museum of Baltimore.

Detail of the picture

The Arithmetic holds a book in which we can read the name of Pythagoras (c. 570 aC – c. 495 aC) and there is a paper on the book with the words “par” (“even”) and “impar” (“odd”) and an addition,  difference and a multiplication. Can you imagine the young Philippe watching his father painting this picture? Maybe Philippe found his way to Mathematics in that moment!

I’ve been reading about Theo van Doesburg and his art is definitely mathematical! Enjoy some of his paintings:

Counter-Composition VI (1925) in the Tate Modern of London (map) Counter-Composition XIV (1925) in the Fundacion Villanueva of Venezuela 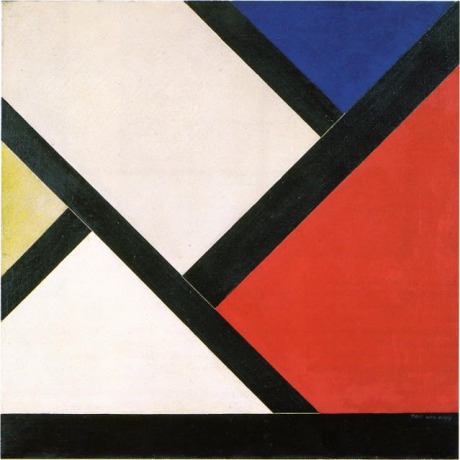 Counter-Composition XV (1925) in the Muzeum Sztuki of Lodz (map)

I think that this post won’t be the last about Van Doesburg!

The maze in the Grace Cathedral

The Grace Cathedral of San Francisco has one maze inspired in the maze of the cathedral of Chartres in France: There is another similar maze outdoors. These mazes were designed by the Polish painter Jan Henryk de Rosen (1891-1982).